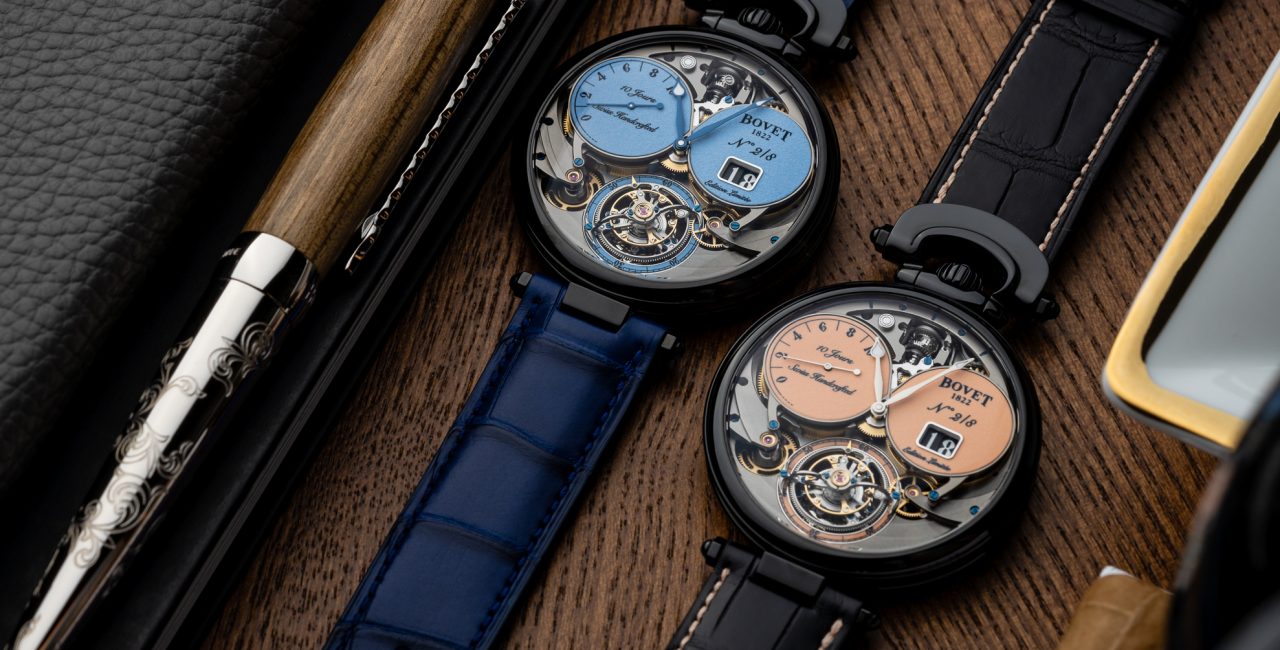 When the Virtuoso VIII Chapter Two tourbillon was introduced last year, it was hailed as an incredible expression of artisanal watchmaking, decorative arts, mechanical ingenuity, and innovation.

This year, the House of BOVET is excited to introduce a new aesthetic that brings this traditional expression of high watchmaking squarely into the 21st century, with titanium cases in brilliant black Diamond Like Carbon (DLC) and Super-LumiNova dials.

The new Virtuoso VIII Chapter Two includes everything else that made this introduction special – the patented flying tourbillon with ten days of power reserve, the patented accelerated rewinding system, the writing slope case and sapphire crystal aperture, the fine movement decoration, the big date display, and the two dials forming a horizontal number eight, which in numerology and in multiple cultures symbolizes luck, perfection, and infinity.

For exceptional legibility, the seconds’ display is carefully designed to be displayed by a Super-LumiNova-coated sub-dial. The arrow of the index hangs over the surface of the delicate circular dial showing the 60 seconds. The easy, precise readability offered by this display, even in the dark, is remarkable. To achieve this, the seconds’ dial must be affixed to the plate during the initial assembly phases, which makes the watchmakers’ work even more delicate when working with the Super-LumiNova coating, as one scratch will necessitate starting over.

It is hard to imagine that a Super-LumiNova dial with such a diameter, hanging over the date disks, could allow for such a large date display. The space between the units’ disk and the hours’ disk is reduced to optimize readability, making it as large as possible for enhanced legibility. The watchmakers also did not forget the date correction, which does not even require removing the timepiece from one’s wrist, and is performed simply by pressing down on the real sapphire cabochon crown. The rapid date corrector and iconic 12-o’clock positioning of the crown effectively avoid any accidental date correction.

The movement that drives this exceptional timepiece meets BOVET’s demanding criteria of chronometry, reliability, and expression. It draws its energy from a single barrel that ensures more than ten days of power reserve, all while maintaining the balance wheel’s oscillations at 18,000 vph.

Finally, the power reserve of over ten days, provided by a single barrel, would require meticulous winding if not for the spherical differential winding system. The application of this ingenious mechanism and the multi-gear three-dimensional teeth of one of its pinions, have received two patents. Because of this differential winding system, the number of crown turns needed for full winding of the spring is halved without increasing friction and forces exerted on the gears.

Now You See Them

The Virtuoso VIII Chapter Two limited edition (8 timepieces) is a modern interpretation of BOVET’s proprietary and patented flying tourbillon with a big date and lengthy power reserve. The Super-LumiNova-coated dials and black DLC titanium cases are a true 21st-century departure for BOVET, and a definite harbinger of things to come.